Patricia Garner, J.D., M.S.W., began her formal study of astrology at the London Faculty of Astrological Studies. Since then she has embarked on an extensive study of the contrasts and commonalities between a two-dimensional astrological chart and the profound drama embodied in our real sky.

Patricia’s Story In Her Own Words

As you might imagine, an independent approach works quite well in debating philosophical viewpoints, but not quite so well in inter-personal relationships. For example, I recall that I was drawn to a “theory of knowledge” class when in college, but I had never taken a philosophy course.  This class was unfortunately only offered to those who planned to major in philosophy, but given that I could take it on a pass / fail basis, rather than for a letter grade, I somehow squeezed in.   What a delight!  Deliberating ideas.  Thinking about what it means to “know.”  Parsing language as cleanly as possible.  As you might imagine, the philosophy professor was delighted, but my fellow students were not quite as enthused.

Much of these energies were expressed in my becoming a criminal trial attorney.  I received my J.D. from Loyola University School of Law, while married and working full time.  I first practiced law as a federal prosecutor, but moved into criminal defense work. I also taught trial practice at the University of North Carolina School of Law. It is from this standpoint that I can legitimately claim that I was a consummate cynic and someone steeped in deductive reasoning.  If there was a mis-step or dishonesty in someone’s point of view, I was plagued with the instant ability to identify and hone in on it.

On the other hand, I have always sought to give of myself to others as deeply as possible. And have never spared myself from the often harsh lens of self-reflection. I could refer to these experiences as a “trial by fire,” but at this stage in my life I look at this dramatic description with humor and self-forgiveness.   The deep sense of caring for others was at least in part why I returned to school and obtained a masters degree in social work.  I continue to work on behalf of others, and hope to claim a small part in passing legislation in Oregon that will pay everyone the same wage for comparable work, regardless of race, color, religion, sex, actual or perceived gender identity, national origin, marital status or age.

So where did astrology come into the picture?   In the fall of 1994 I had been undergoing some tumult in my personal life and sought direction from an astrologer, George Tripodi in Virginia Beach, Virginia.  Before the reading got to the five-minute mark, I felt that I was known, or acknowledged, in a way I had never experienced.  I could, for example, see that my tendency to intellectualize didn’t brand me as a bad person, nor did I deserve punishment for it.  Before the reading, I had no idea that my public persona was forthright and often intense, and that perhaps digging in or finding another even more persuasive argument was not necessarily the best solution.  Although my spirit of Aries is always present, thanks to the reading — occasionally I am able to temper my words rather than lose my temper!

One would think that I would have dropped everything and become an astrologer.  Not so.  For years I sought direction from George Tripodi, and here and there read something about astrology or attended a conference that referred to the topic. Around the time of second Saturn return, my interest in astrology took on a much greater focus.   I began formal study of astrology at the London Faculty of Astrological Studies, and attended conferences, most notably the Northern Oregon and Washington Astrological Conference (NORWAC) in Seattle.

I was off and running. Another seminal moment in my experience with astrology took place in 2014, when I heard Adam Gainsburg speak at a NORWAC conference.  Again, a very profound change of direction for me.  I had been moving on a course towards becoming a professional astrologer, but all of a sudden I realized that there was a very big difference between a two-dimensional astrological chart and the profound drama embodied in our real sky.   One question led to another and I began studying with Adam.

As anyone who reads A Cosmic Dialogue can see, my search to assimilate astronomical information into my astrology took me down a number of roads.  Bernadette Brady profoundly reinforced the viability of lifting my eyes from a two dimensional paradigm.  Nicholas Campion provided an inspiring overview of astrological history, which led me to some primary sources.   Philip Sedgwick provided a path to heliocentric observation and the beauty of astronomy.

As I conclude this biographical summary, I am reminded of Robert Hand’s assertion that an individual more fully finds her or his Sun later in life, after living a variety of life’s experiences.  My Second House Sun in Taurus, conjoining my North Node, evokes this statement.  Working on A Cosmic Dialogue took a lot of just sitting with questions, without drama or desire for recognition.  My pursuit was no less relentless, but it was more calmly and naturally done.

In researching and writing A Cosmic Dialogue, I came to experience a quiet sense of spiritual reception.  I also learned that my Midheaven-conjunct Jupiter also lay near the Galactic Center.   While I slowly grounded myself in a variety of perspectives, I felt that more than my ego was controlling this infusion of knowledge. When I stopped to listen, I felt myself open to being dipped into a starry universe of knowledge.  Yes, I was learning and, yes, I was writing, but it was as if it was not “just” me.  Even if for a moment, I was given a glimpse of A Cosmic Dialogue.

Since the astronomical community reclassified Pluto in 2006, we have experienced a revolution in how we perceive the celestial bodies that occupy our Solar System. This flurry of new discoveries presents several problems for the astrological community, which Patricia Garner takes up in her thoughtful treatise, A Cosmic Dialogue, with passionate lucidity and scholarly explanations. And her narrative makes a good read. It makes us think, and that’s her primary purpose in writing A Cosmic Dialogue. By addressing the issue of how we name planets, she’s encouraging astrologers to find some core principles that will help build a stronger, more cohesive and constructive community.

Get your copy of
A Cosmic Dialogue

Get your copy of 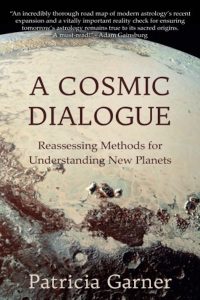